SUDBURY, ON—Carrying a torch for 20 years would be a burden for many, but for the students of Lockerby Composite School, it is an honour they do not take lightly.
When an eight-year old student Laura Cotesta was first diagnosed with a spinal cord tumour, there were no services for children with cancer in Sudbury, forcing her to travel to Toronto for her treatments. Laura’s cancer returned five times. Years later, as a secondary school student at Lockerby Composite School, Laura decided to think of her illness as an opportunity to take action and launched the Kids Caring for Kids Cancer Drive, a door-to-door fundraising effort to help support the establishment of a local cancer centre. Just after graduating from high school and after two successful Cancer Drives, 18-year old Laura succumbed to the disease. That was in 1997.

Nevertheless, the Cancer Drive continued to gain momentum year after year. After Laura’s passing, her sisters led the initiative. Today, the students of Lockerby—who were not even born at the time Laura studied there—carry on the fundraising effort in droves.

Lauren-Ashleigh Beaudry, a grade 11 student at Lockerby, explained how the massive effort is coordinated:
“The way we work now, with its size, there are a number of teacher teams that students sign up for. One teacher may take only 10, another teacher may take 100, and they organize the drivers to get the students where they need to be. It really has grown, but it has been an in-house evolution.” 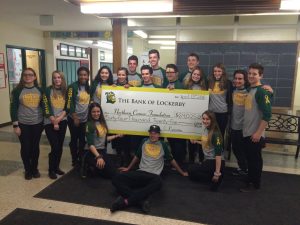 Lockerby’s Cancer Drive takes the city by storm. In addition to the door-to-door campaign, the fundraising extended to a celebratory dinner and gala, a pond hockey tournament and a t-shirt sale, all amounting to an incredible total over $64,000 this year and more than $800,000 over the past 20 years. Students also organized a motivational assembly to begin the effort and a thank-you assembly to celebrate its success. But there is more to it than that, said Lockerby teacher Ms. Ashley Fraser:

“It’s not just about the money, it’s the amount of kids we get to participate, it’s the phone calls we get over the next week saying how impressed they were with the number of individuals who showed up at their door—‘They were very polite’, ‘They had a great attitude’, and a few times people call in and say ‘I didn’t have change that day, can I still make a donation?’ A lot of times young people get a bad rap in our society or a terrible reputation. They’re messy or get into shenanigans, but for one night 400 of them get together and do something good.”

The events support the Northern Cancer Foundation, the fundraising vehicle for the Northeast Cancer Centre, which is now able to provide some of the treatment services Laura was not able to access locally 20 years ago. The Cancer Drive also has a transformative effect on the students of Lockerby, said grade 11 student Ethan Gladu:

“It’s almost like a season at Lockerby, Cancer Drive season, because everyone looks forward to it and even afterward—Ms. Fraser calls it the ‘afterglow of Cancer Drive’. There’s just an amazing energy, everyone is so connected. During Cancer Drive that’s when you see all the students come together.”

“I think that when Laura started it she was extremely passionate about it. When she started off, of course it was small, but everyone could see her passion. Her spirit is still with us and her energy is so strong and it still motivates me. Laura passed away just before I was born. I wasn’t lucky enough to have known Laura personally, but just hearing the stories and seeing what she was able to do, it is a powerful message.”

“Her main goal was to get a group of friends together and raise as much money as possible. I don’t think she realized that it would turn into this huge thing where there’s an entire committee planning this.” 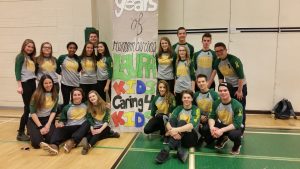 Lauren-Ashleigh considered the lasting impact Laura’s optimism has had on the city:

“Through everything she went through, she was able to remain positive and hopeful for an outcome. And her quote she lived by was, ‘If you keep on hoping and praying for sunshine, sunshine is sure to come.’ She might not have realized how much of an impact this Cancer Drive would have made on Sudbury, but I think it would surpass her dreams if she knew.”
Planning such a large-scale event provides room for learning and personal growth.

Lauren-Ashleigh explained what it took:
“You showed leadership when you stood up and took on different challenges and different roles within the committee to plan different things. Even though the roles may have been challenging, you just had to take the leadership and initiative to persevere and get the job done.”

Youth are tasked with rising to the occasion and gain skills in the process, said Ethan:
“This is a fantastic experience for leadership and teamwork. We have to make adult decisions, big decisions, tough decisions. When you get involved, you get a whole different perspective.”

With several years of the Cancer Drive under her belt, Ms. Fraser has seen what the project means to the students of Lockerby and offers advice to other schools looking to replicate the formula for a positive volunteer experience:
“The goal should be to have as much of the student body involved as you can and to have a positive impact and connection with your community. If that is the goal, you will always succeed.”

Through the Kids Caring for Kids Cancer Drive, Ms. Fraser is reminded of a couplet often attributed to Goethe:
Whatever you can do, or dream you can do, begin it.
Boldness has genius, power, and magic in it!

Two decades after Laura Cotesta’s boldness produced the first Cancer Drive, Lockerby students demonstrate genius in their event planning, power in their numbers and magic in their collective energy.